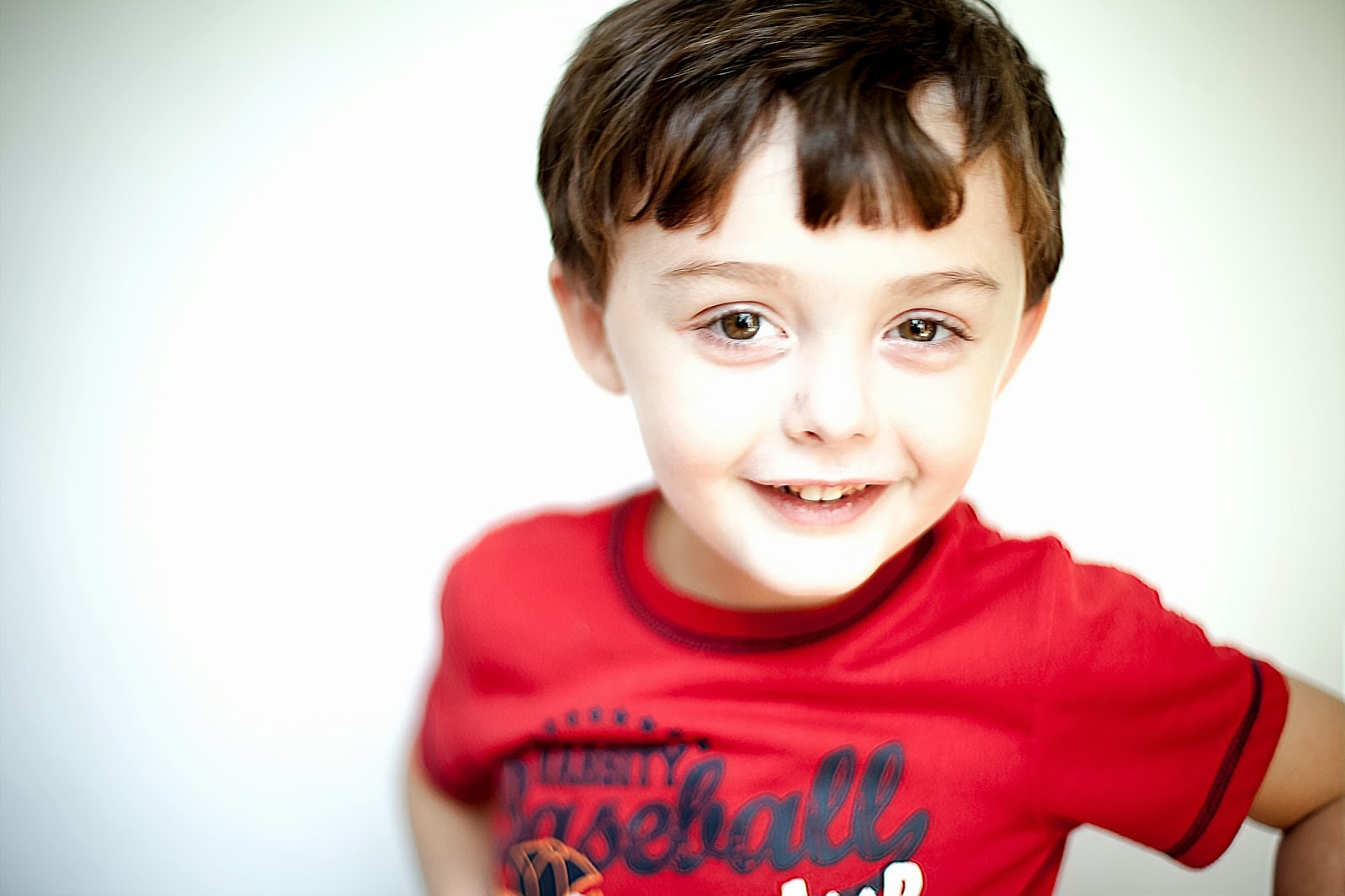 Hi friends! This is a few months late (eek, his birthday was at the end of August) but I wanted to do a post about it anyways because Charlie turning 4 is pretty crazy and awesome!  Woweee, hard to believe this little guy is a 4 year old already.  He's such a little cutie pie with a very sweet heart and kind and happy personality.  He loves cars, garbage trucks, car transporters, bowling, legos, and playing with friends.  He has bit of a temper (like most 4 year olds I'm assuming) and has a pretty hilarious/obnoxious frowny face when we make him do something he doesn't want to do!  He'll say "You guys! Stop talking all over me!" when Robb and I are both telling him to do something.  He also says the sweetest and funniest things- if you're sad he'll ask if you want a hug and will tell you "It's OK".  He has a great laugh and loves to be silly and have fun! 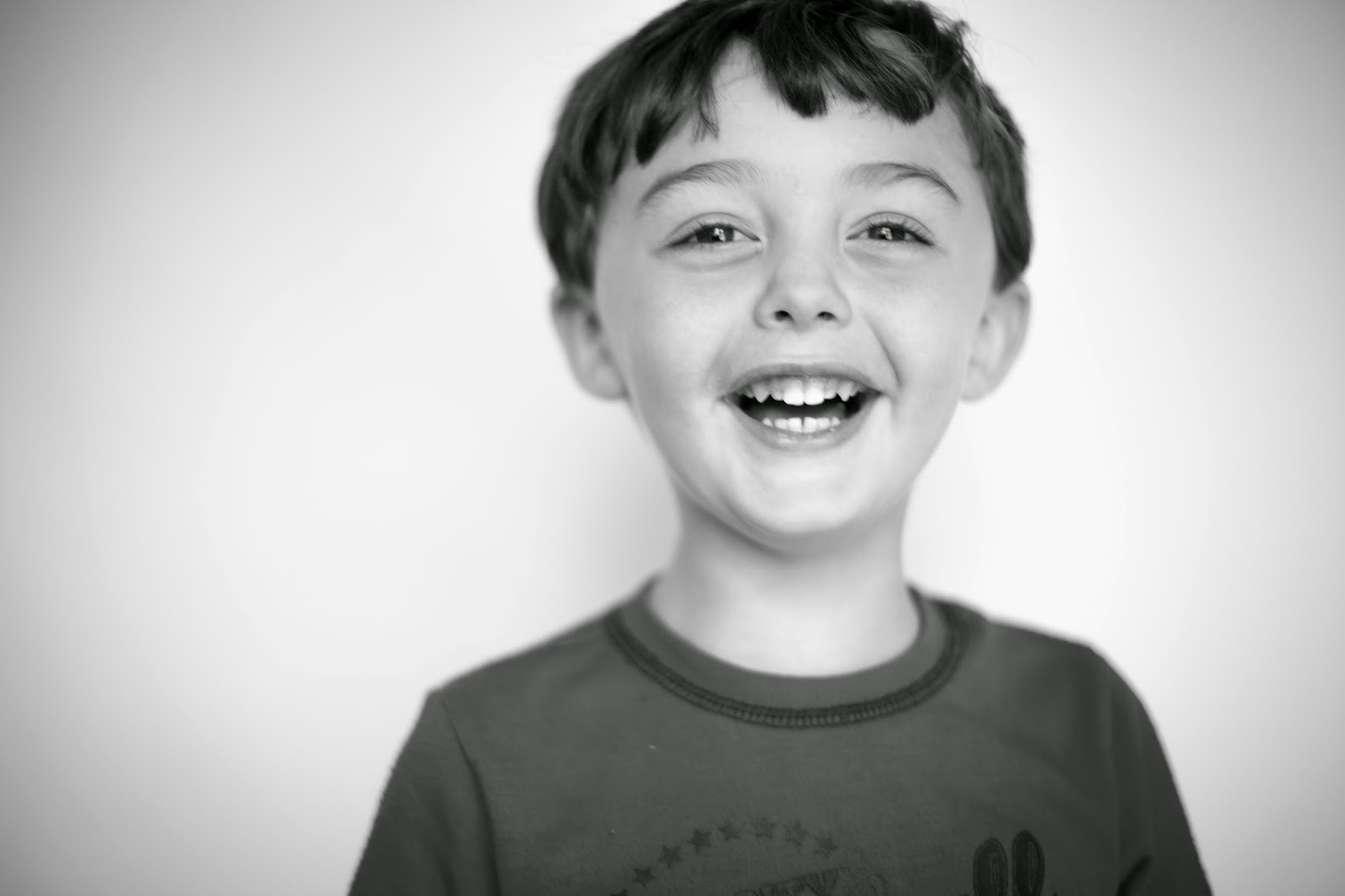 We try and make his birthday special every year, and this was the first year we had a "kid" birthday party.  The Sunday before his actual birthday we had a party at the Bounce! house in Clinton, CT.  Coincidentally the owner of the bounce house has a child with CF too!  Charlie was so looking forward to all of his friends coming to play with him at his party. We don't know many people with kids in our area so Robb invited anyone and everyone we knew with young children that would like the bounce house.  We ended up having a full house, which was great!  Then we had pizza and cake-- the Bounce! house took care of all the details including ordering the pizzas, setting up the room, and there was even a boy that played with Charlie until his friends showed up.  If you live in CT definitely check them out, they were wonderful!  We didn't do presents at the party because we wanted more time to bounce and figured he'd be getting LOTS of presents anyways from his family. 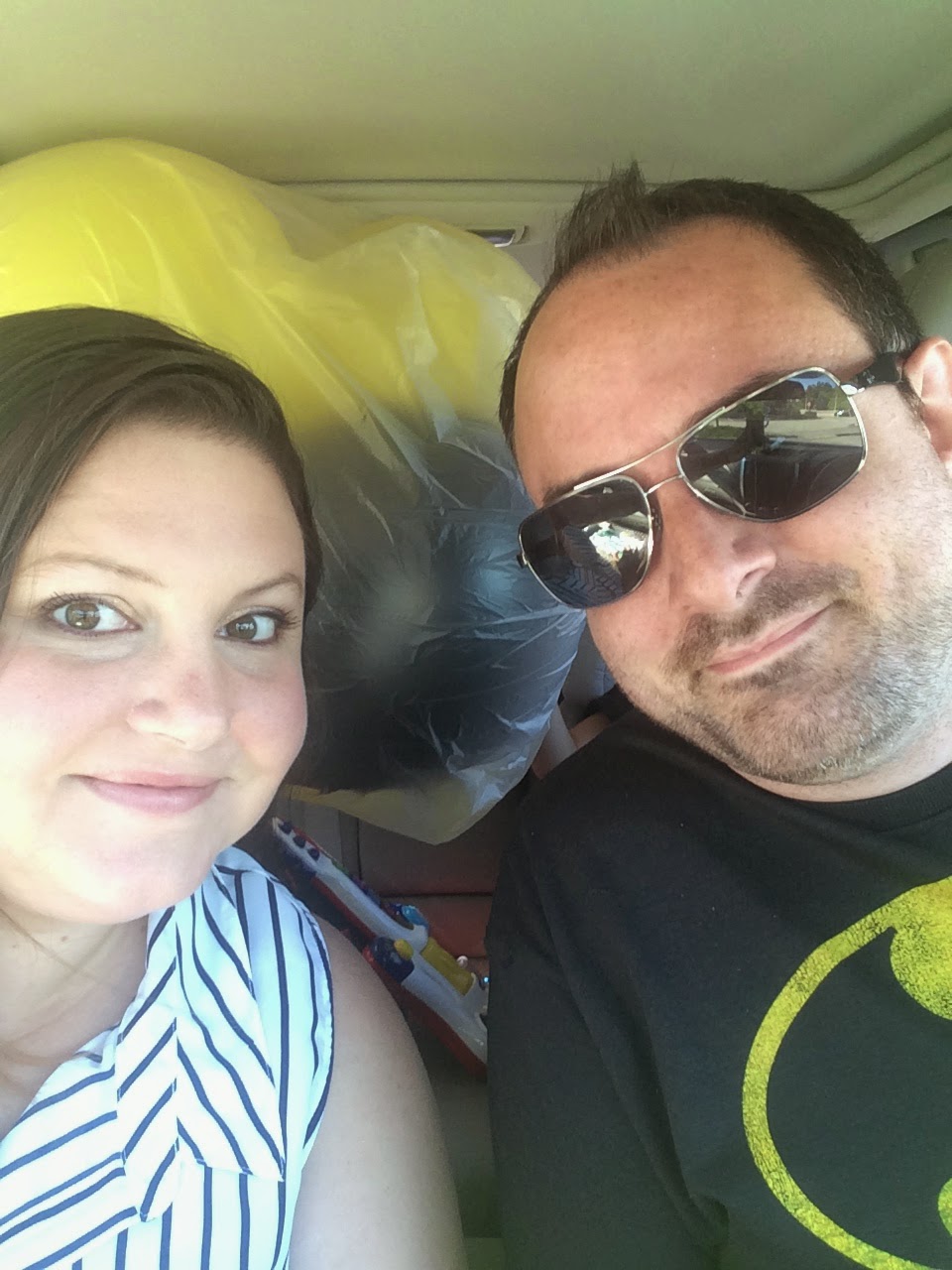 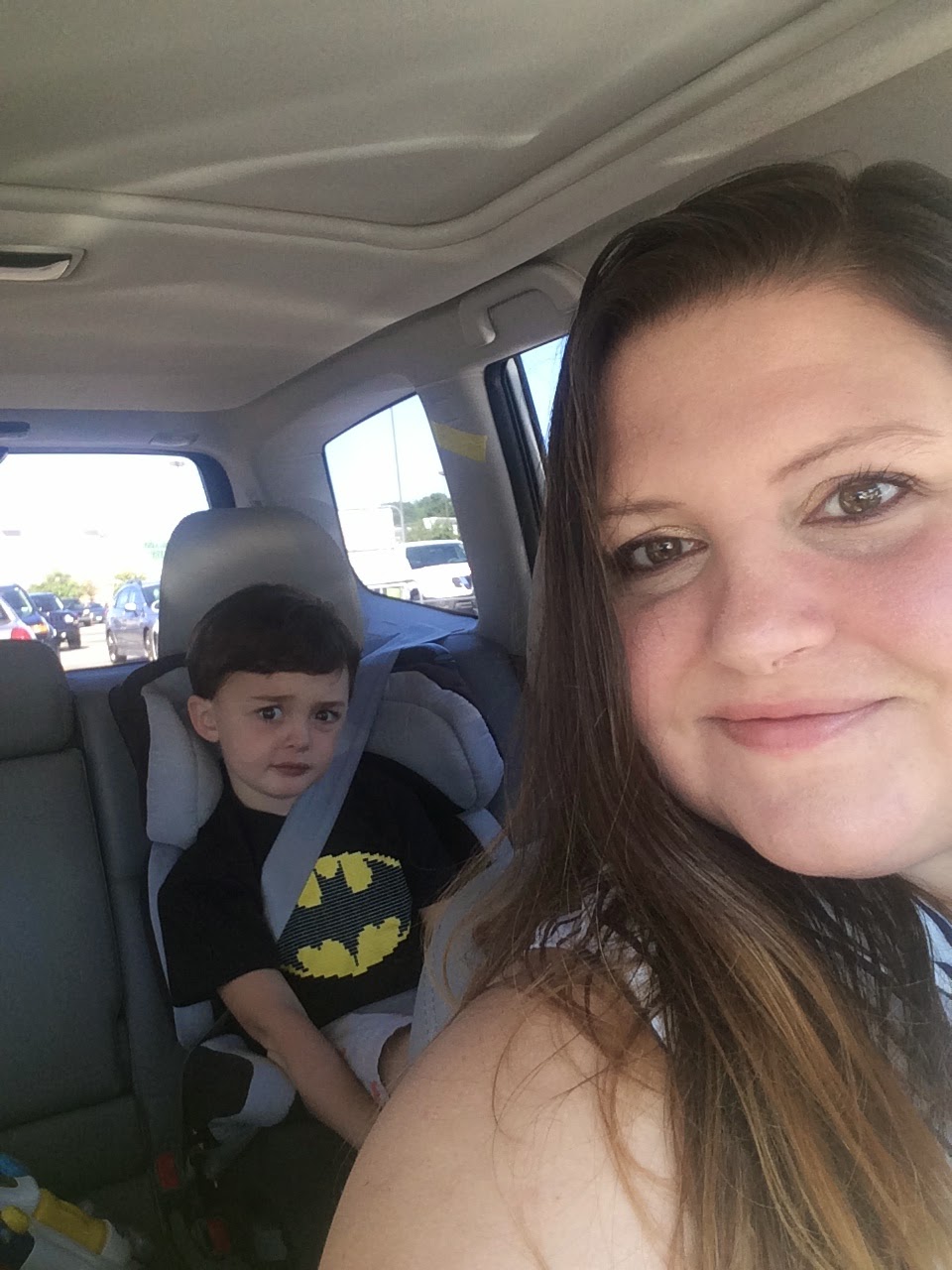 Stopped to grab some balloons for the party! Of course Robb got so many we couldn't see out the rear window :/  Charlie and Robb wore matching batman shirts to go with the theme :) 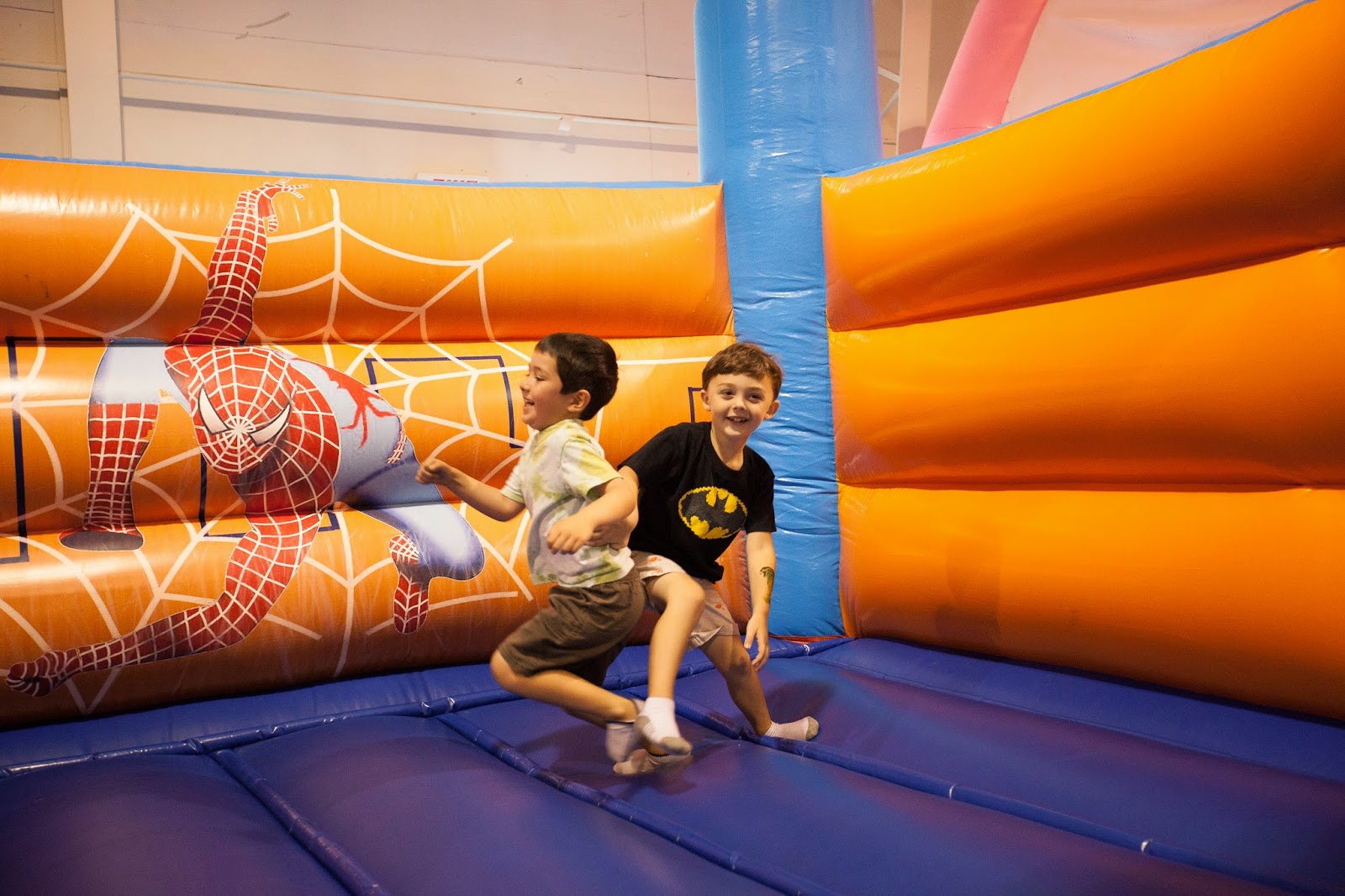 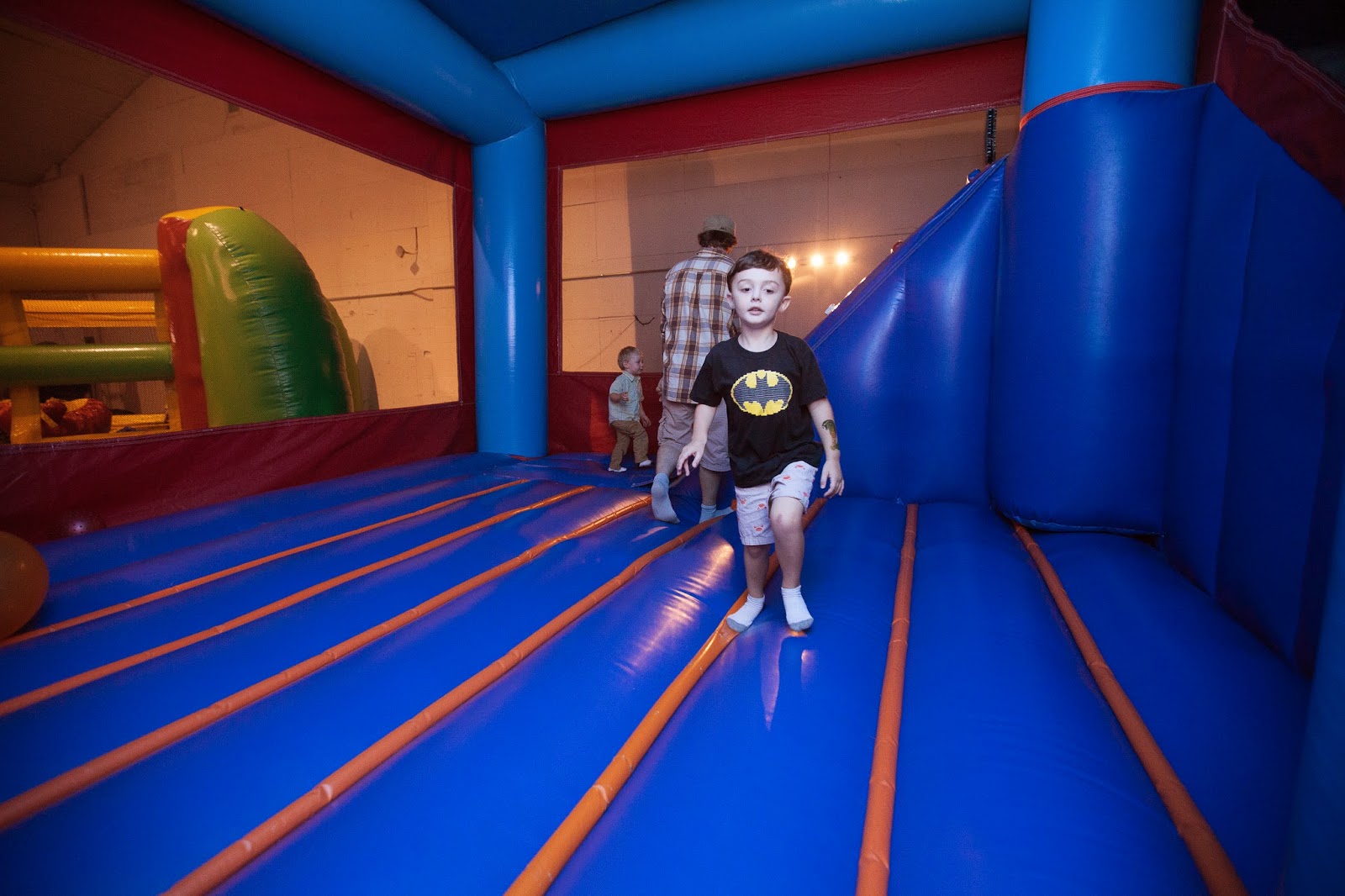 After the party ended at 1pm we drove 15minutes to my parents beach house for a family party with his grandparents, friends of the family, and his great Aunt Peggy.  It was a gorgeous beach day and we waded out to the sand bars and played in the waves.  Charlie also opened some great gifts- he got a lego car transporter from grandma and grandpa and a very cool kids digital camera and RC car from his Aunt Peggy. 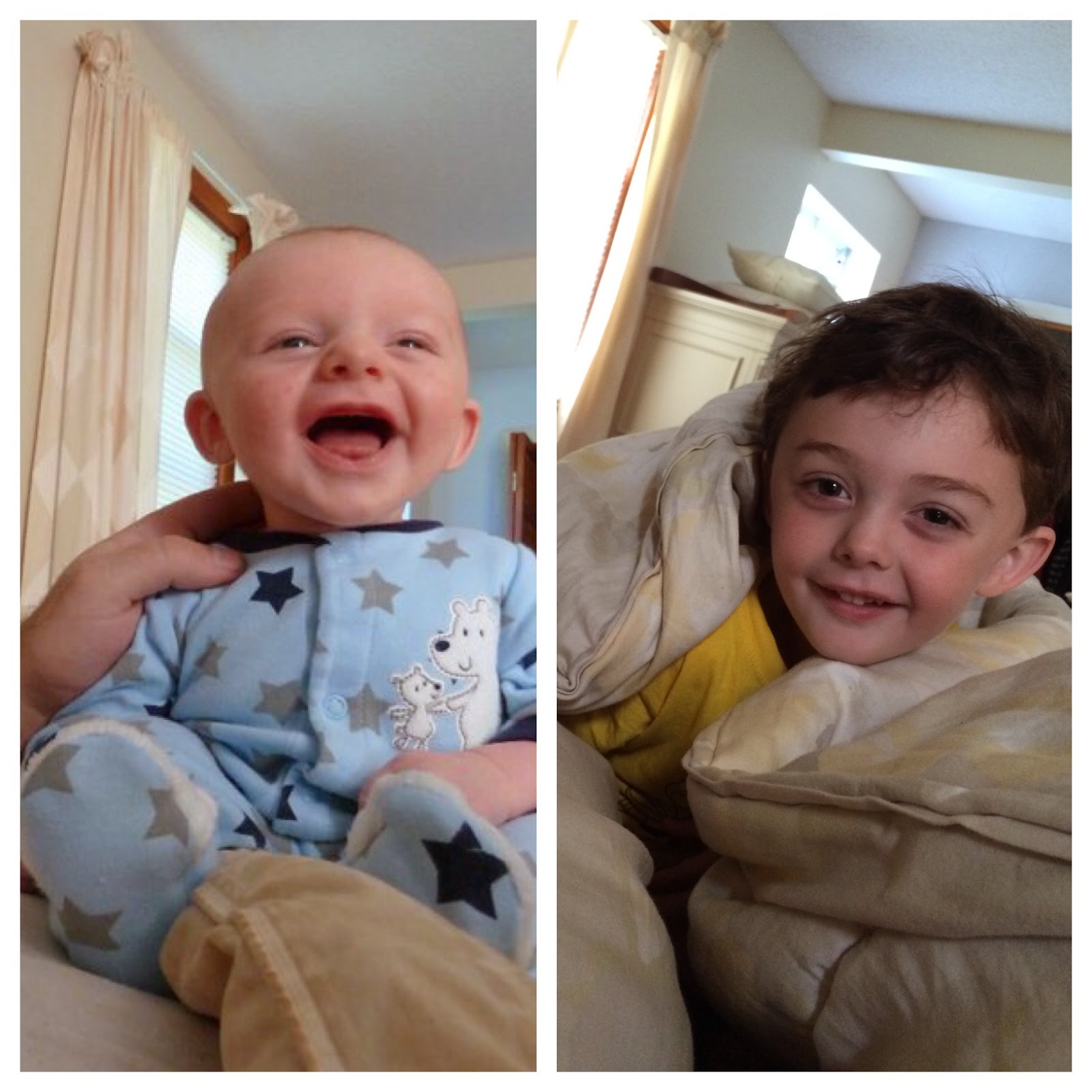 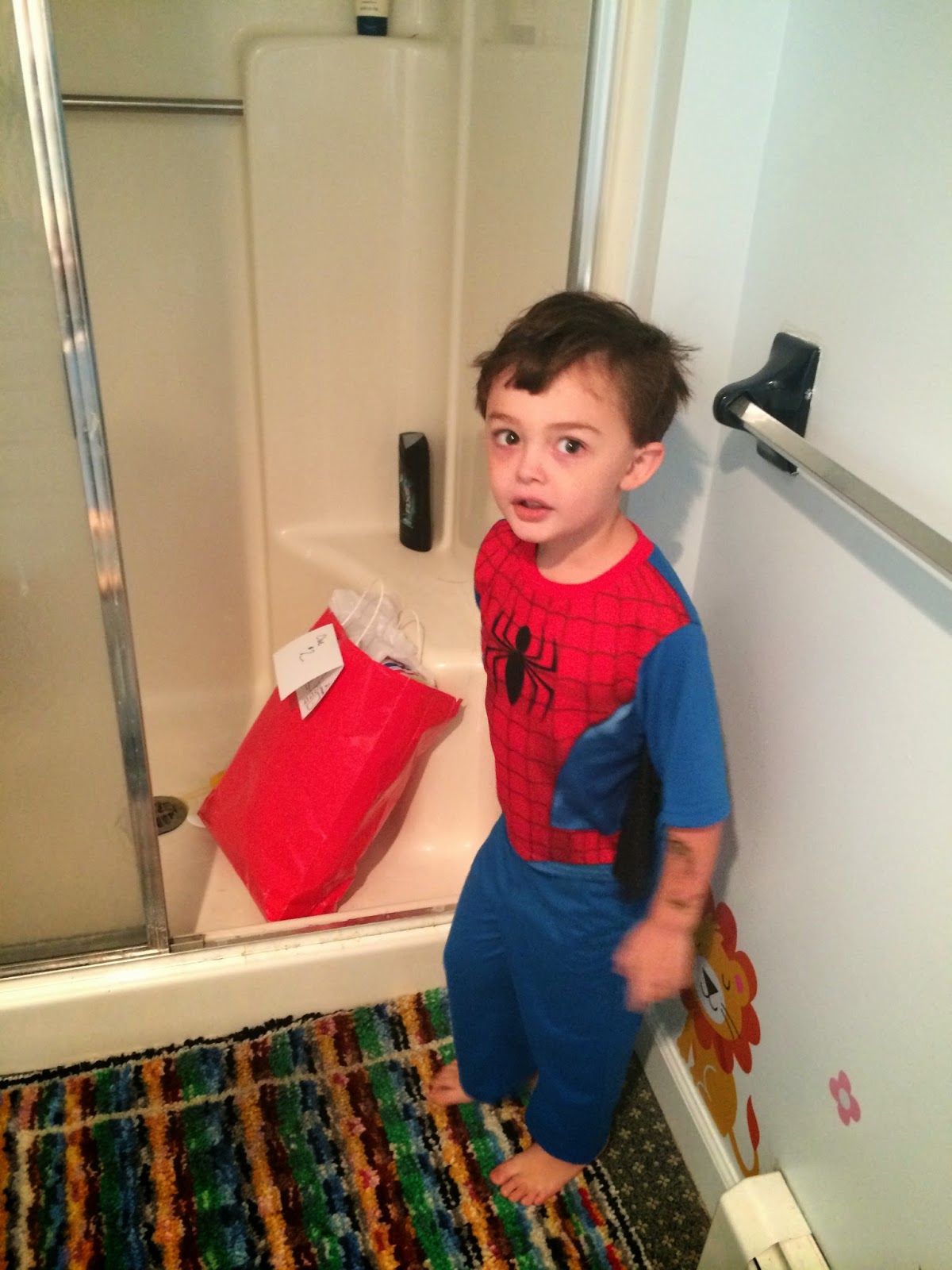 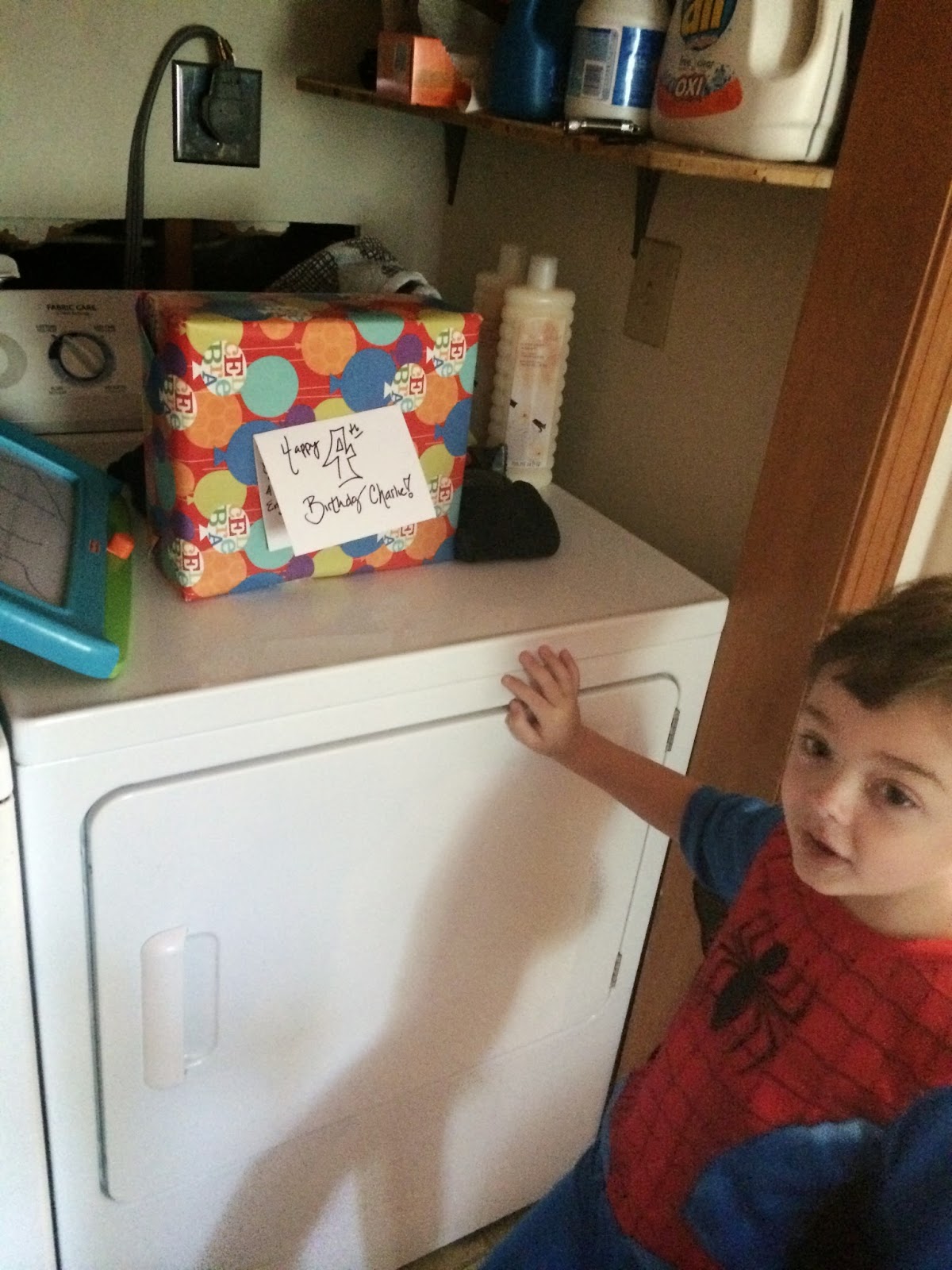 Charlie's actual birthday was on Thursday but he kept getting presents upon presents until then from his awesome Nanny and his other relatives.  On his actual birthday I made a fun treasure hunt with picture clues and presents all along the way.  He loved it!  We got him rollerskates that he had asked for, a new school backpack, batman legos, and a few other games and books.  His grandma in Florida got him some really cool games (what's in Ned's Head is definitely a hit), books, and a totally awesome basketball hoop. 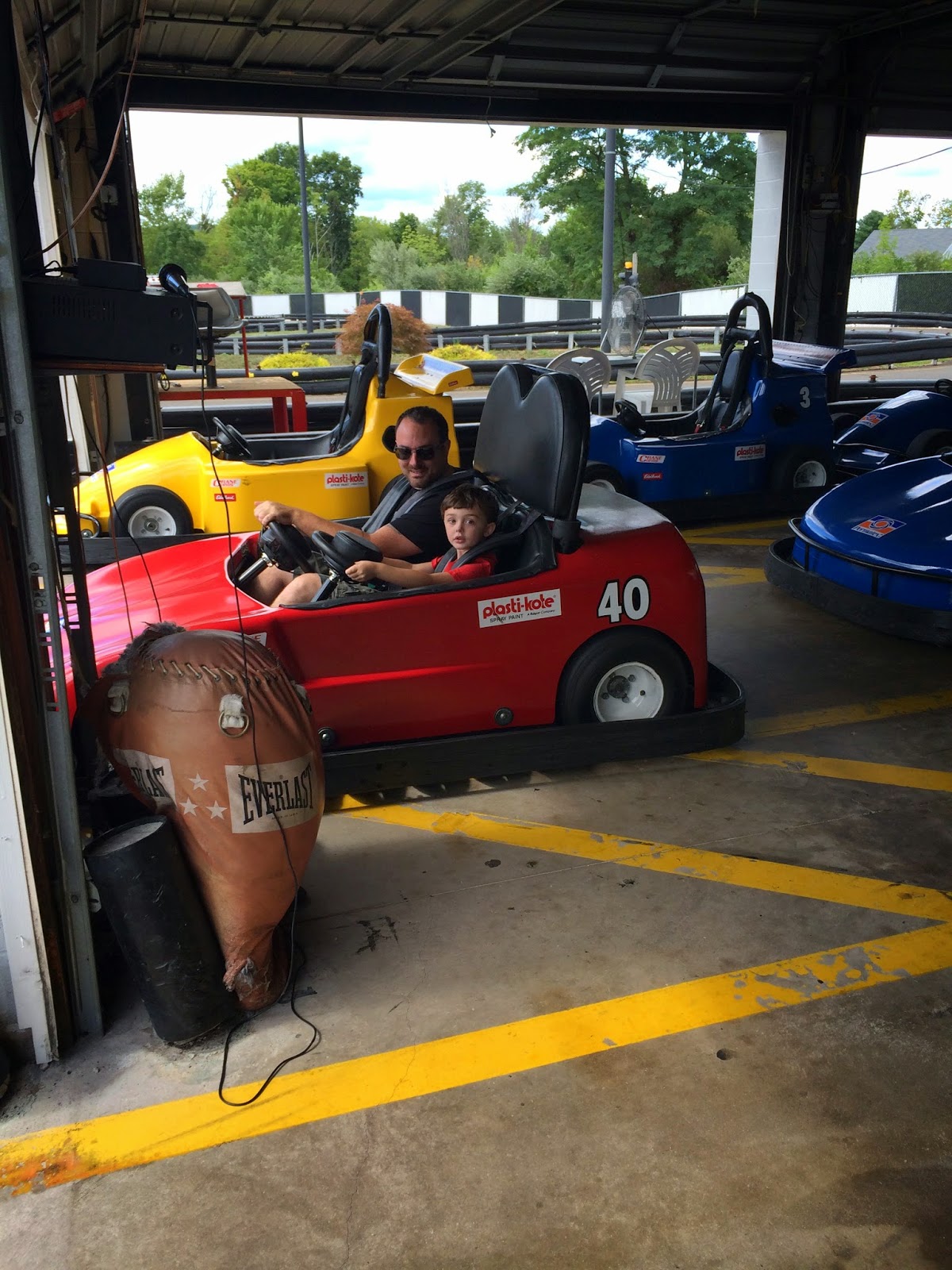 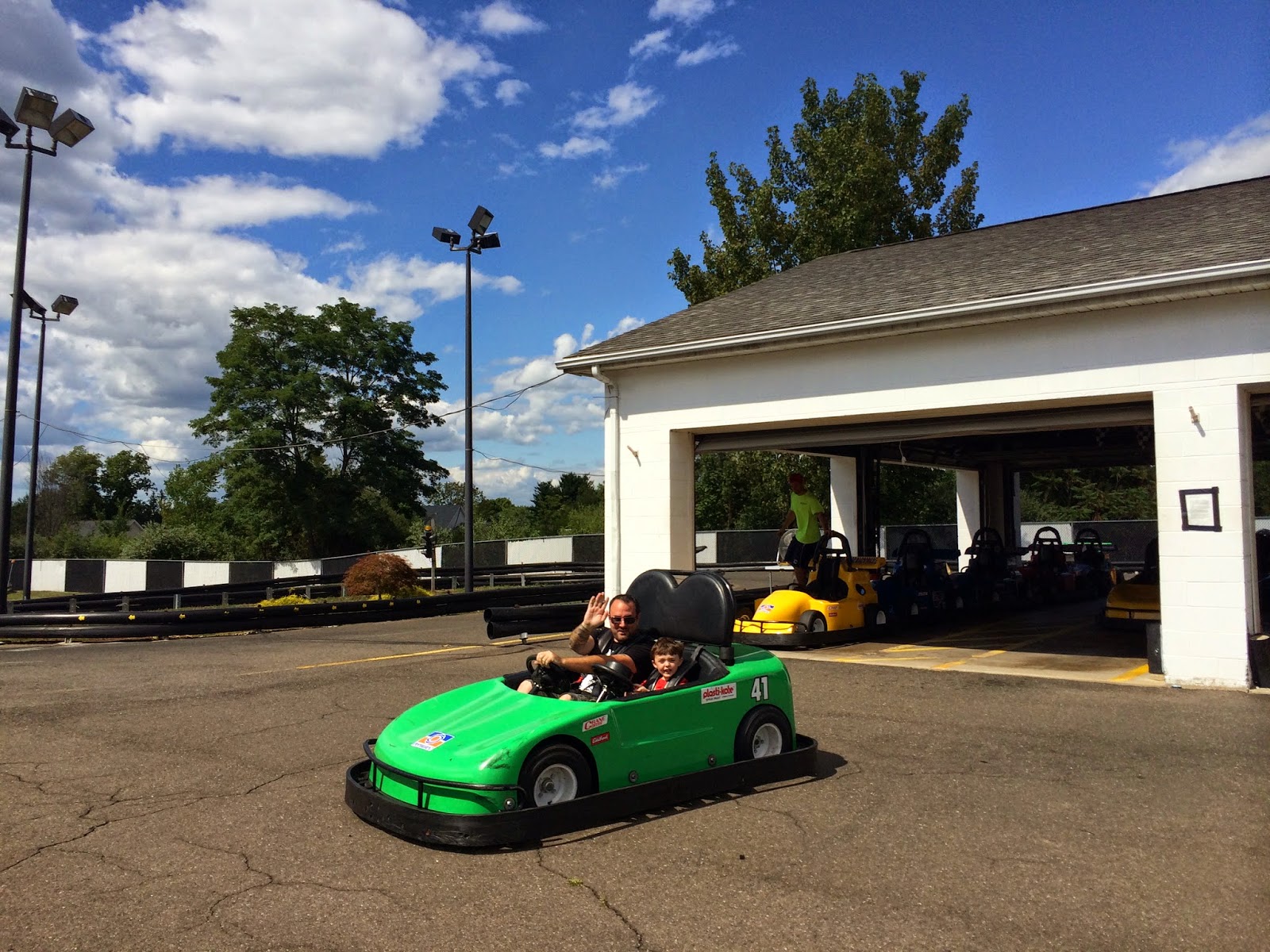 We went back and forth on what to do with him that Thursday for his actual birthday (Robb and I both took the day off work) but eventually I saw a Groupon for Go-Kart racing and knew it would be perfect! He loved doing it in Florida so we knew he'd be so excited.  We didn't tell him where we were going but told him he had a fun surprise after lunch.  We ate at Fridays (one of my favorite chains, there's none close to our house but there is one on the Berlin Turnpike, which is where the Go Karts were) which was really fun and then surprised him.  He LOVED it! Robb and Charlie went 5 times around the track and even convinced me to try it once (and never again! I'm a huge wuss).

After Go-Karts we went to duckpin bowling and played a few rounds. 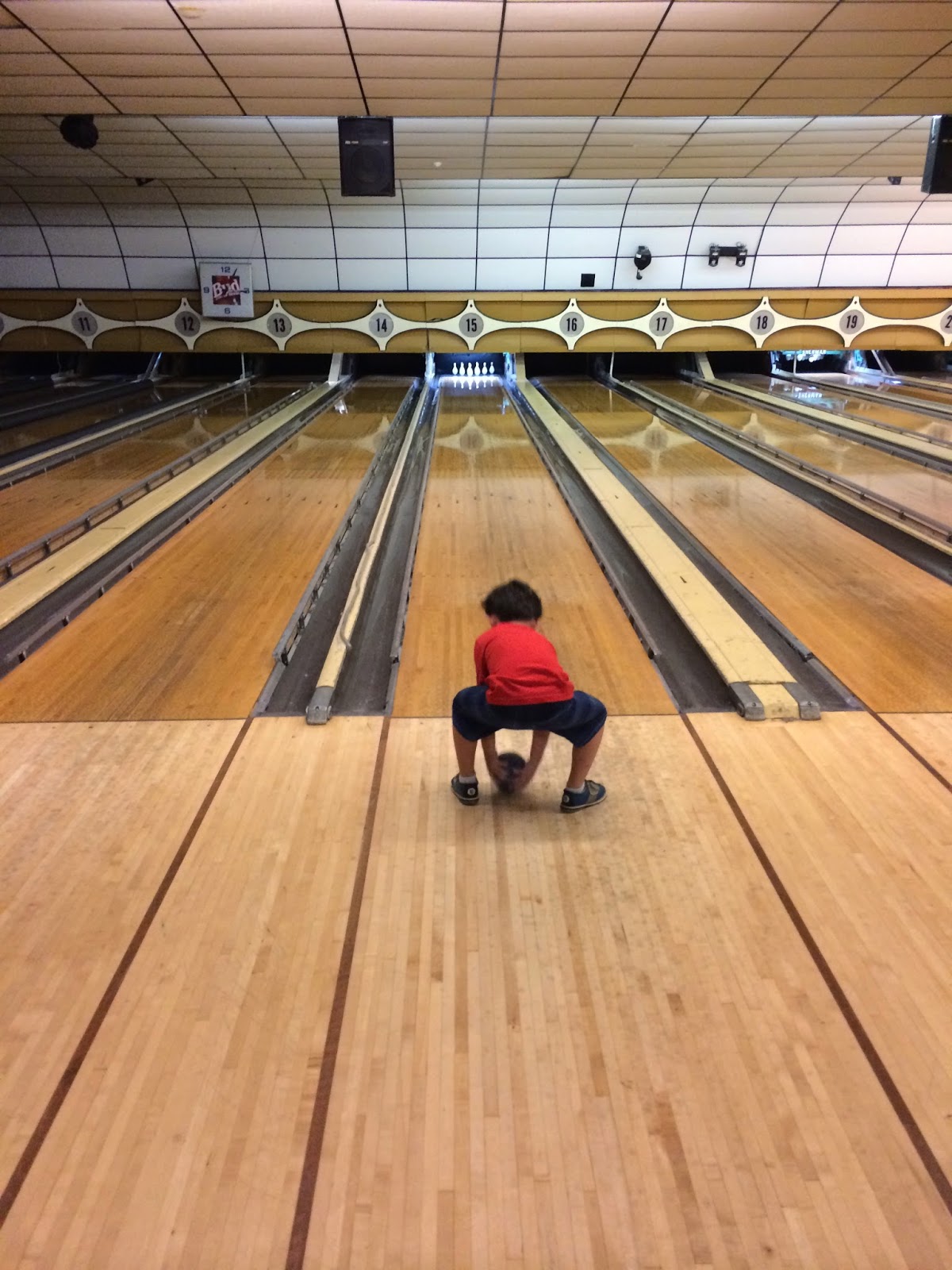 After duckpin bowling we went to mini golf 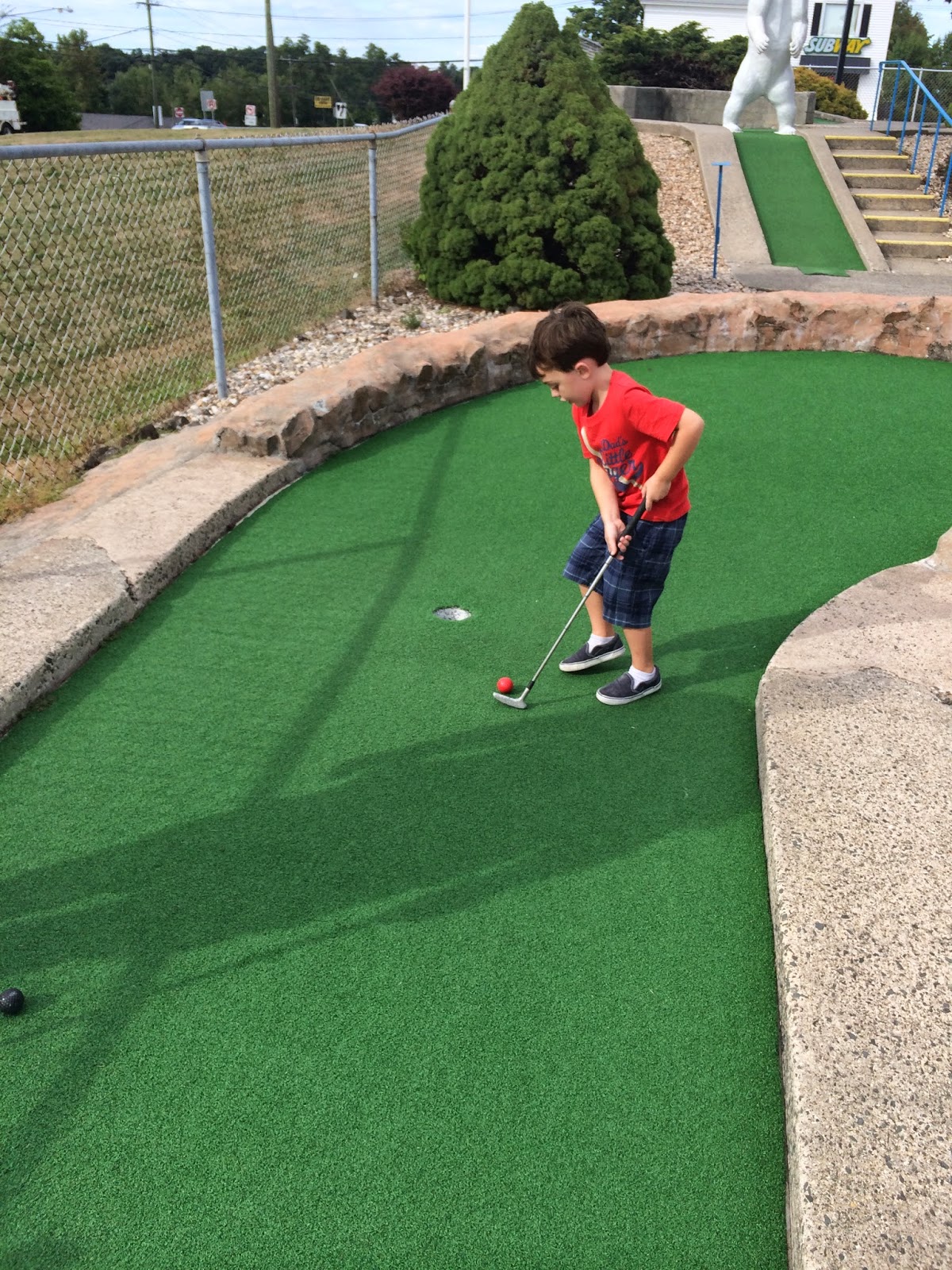 After dinner we went home, did a treatment, and then we all promptly collapsed from exhaustion haha.  Seriously though, we were so tired!  But in a good "we had a great day" type of way.  And that was Charlie's 4th birthday! I didn't bake a cake or handmake his birthday invitations or custom design his birthday decorations but it was perfect anyways (minus a few 4 yo meltdowns along the way hehe).
Posted by Glue Meets Paper at 8:53 AM

Glue Meets Paper
Hi my name is Cassandra. I live in CT with my 6 year old son, Charlie, who has Cystic Fibrosis. I work in the biotech industry during the day but at home I love to cook, bake, and create scrapbooking layouts, cards, wreaths, and other crafty things.